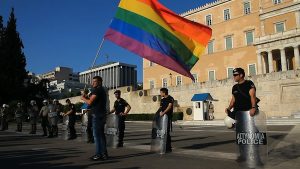 Like most countries in the world, the LGBTQ+ community in Greece has fought years of oppression to gain their rights. Homosexual activity has been legal since the 1950s; however, legislation to stop discrimination against one’s sexual orientation in the work environment hasn’t been enacted until 2005. A visible change came into Greece in 2015 when the government passed a bill granting same-sex couples the right to engage in a civil union. This gave same-sex couples all the rights that marriage would entail except for the actual title and right to adopt. In a country that is heavily influenced by the church, it is always important for someone who is openly queer to be cautious and take note of surroundings. Though Greece has made great strides for queer rights, a little less than half the population still feel negatively towards queer people. This doesn’t mean queer spaces and communities don’t exist. They’re scattered all over Athens. END_OF_DOCUMENT_TOKEN_TO_BE_REPLACED

Continue reading
May 20, 2020by Nicole Brzys